What is not being said about the Covenant?

In a long letter to the Church Times the Bishops of Bristol and Oxford set out their commitment to the Covenant and what's at stake should it be defeated.

I choose to believe that many, perhaps the majority, of the English bishops are personally committed to the Covenant - but always and only in broad generalisations.

In essence we are told: the Covenant is A Good Thing, it doesn't change anything but is vital to keeping the Communion together, and the consequences of not passing it are horrendous.

But this advocacy never seems to address what any critical reader of the Covenant text might ask:

I struggle to see the logic.


But I do see something missing. The ultimate power of Section 4 of the Covenant is to exclude an offending province by recommending to every other province that they turn their backs on it. All lesser powers of exclusion and demotion stem from this central power.

(And the fact that the Archbishop of Canterbury has already arrogated to himself such powers to bind and loose without the Covenant cuts both ways: if he can already make such decisions then it's not new to the Covenant; equally, if he can do it anyway there's no need for a Covenant. And the fact that a province probably can't be excluded from the Anglican Consultative Council legally is another example of the fine mess we're moving towards.)

Anyway, I'm left with the conclusion that what's important about the Covenant, and the supposed reason why the Communion will fall apart without it, is something not being said in the Bishops' letter. The bottom line is: churches of the Global South are only prepared to remain in communion with Canterbury if The Episcopal Church (USA) and the Anglican Church in Canada are excluded. This is division in the name of unity.

Thus, what is not being said is: the Anglican Communion can only hang together if the North Americans are hung separately.

If that's so, then who's next?

1) The Covenant has been widely consulted on.

Yes, though official responses to the consultation were often mixed and often from fewer than half the provinces. More importantly, it was normally only the senior hierarchy who were consulted.

There has been no attempt to consult more widely, let alone to give the time that would have been necessary for proper reception.

2) The Covenant is vital for the Communion not by addressing the divisive issues head-on but by (i) reasserting what we hold in common and (ii) by describing best practice in our common life.

A) The Covenant does propose new structure:
I don't want to repeat myself, at least, not too often, and I've already made this argument recently in response to the reported comments of the Bishop of Dover. What the Covenant says is:


(4.2.9) Each Church undertakes to put into place such mechanisms, agencies or institutions, consistent with its own Constitution and Canons, as can undertake to oversee the maintenance of the affirmations and commitments of the Covenant in the life of that Church, and to relate to the Instruments of Communion on matters pertinent to the Covenant.

Neither these, nor the consequent structures necessary to maintain co-ordination between these offices currently exist. Therefore they are new structures proposed by the Covenant.

B) The Covenant does propose new powers
But, for one key example, it would give the Standing Committee of the Anglican Communion the power and duty to "monitor the functioning of the Covenant" (Covenant, para. 4.2.2.)

This is self-evidently new, since the Covenant is new. It is a duty of oversight and power of scrutiny which the SCAC does not currently have. Where information is power, and with an office in every province, this places the SCAC in an extremely powerful position. It has been moving in this direction for many years. The Covenant will embed its accumulating powers in concrete.

I am well aware that the Covenant reiterates explicitly the autonomy of the provinces. But this is a legal fiction. The autonomy it asserts in one paragraph is taken away in others by the new structures, powers, capacities and sanctions described and effected by Section 4 of the Covenant.

C) A statement of Belief. I don't know whether or not this statement is exactly the basis of ecumenical agreements with other churches but, given the extensive debate over its formulation, this would seem improbable.

It may be that a common statement of belief is a good idea. It might, for example, be of significant help in future ecumenical  discussion. Although, conversely, to ensure conformity with the Covenant there may be a need to revisit the many and varied ecumenical agreements currently in place in the different Provinces.

But what is certainly new is making a detailed doctrinal, creedal, statement the grounds on which Anglicans cohere. (The Chicago-Lambeth Quadrilateral was so long-lived because it was not detailed.) This has the potential to replace both being in communion with the See of Canterbury and the legal position of being a Church listed in the Appendix to the Constitution of the Anglican Consultative Council as the basis of being defined as Anglican. As ACNA has considered.

And, in passing, it is not clear whether future Anglican clergy across the world will be required to assent to this creed or, if so, on what terms.  If so, it would certainly require revision of the Church of England's Canons.


describes the best practice of how communion may be sustained within the Anglican Communion ...

except that it doesn't. The Covenant prescribes a conflict prevention and resolution mechanism. We'll only know whether it's 'best' after several attempts to use the mechanisms. My prediction is that either it will generate a whole lot more rules and regulations in the attempt to make it work or, in a predictable complex and multi-province conflict, it will simply be bypassed and replaced by the usual politics. (My summary, and critique. Of course, the Covenant could be a one shell cannon, for a single use only, but that might be taking conspiracy theories too far.)

May I add that I think conflict prevention and resolution mechanisms are inherently a good thing. But best practice surely entails parties entering into the process voluntarily and with no threat of sanction. Furthermore there is a conceptual problem which can glue up such mechanisms in theological disputes. Where conflict resolution processes usually look for compromise theological disputants generally want a right or wrong judgment, precluding compromise.

But the point here is, it's new. There is no such common framework in place and no current commitment by provinces to abide by one. 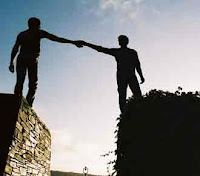 And to imply that the Covenant would have made any difference in Zimbabwe, or to support for Japan fallowing the tsunami, is pushing the boat out far beyond the limits of credulity. Conversely, if the Church of England rejects the Covenant, there is nothing to suggest that all its links around the Communion would wither and die.

To the contrary: we wish to reaffirm the Communion's traditional mutual regard, its rich diversity, its varied traditions, its mutual aid and mutual criticism, its awkward dispersed authority and its uneveness of orders.

For all these reasons we reject the Covenant.