A happy Macaroni in a bridal veil
From the Office of the Primate of Antarctica
First, may I congratulate the Executive Archdeacon on the birth of his most recent chick: a small, perfectly formed and timely book entitled The Anglican Covenant: how we can make it work for us (Chilly Publishing, 2010).

I am also delighted to say that it was deep blessing for the whole Province and for me personally to be able to confirm some thirteen thousand young albatross at the Mission of the Archangel Gabriel, Disappointment Island, our most recent mission church plant.  At this rate of growth we will soon be entitled to an additional place on the ACC.

Discussion with the Diocese of Christchurch over territorial jurisdiction have been entirely cordial, despite media reports.  There has definitely been no question of any breach of any moratoria.

To all members of the Church of Antarctica.

It has been decided by the Provincial Synod of Antarctica that the proposed Anglican Covenant shall be sent to all members of the Church for study and comment.


Please note: There is no opportunity to amend the Covenant.


The Anglican Covenant has been sent to each Province to be accepted according to the decision making mechanisms in each Province. In the case of Antartica the Covenant has been deemed 'Section 8 business'.  This means that it must be sent to all congregations for comment and their comments will be weighed carefully and prayerfully.  The final decision will be made by the Provincial Synod's Executive Committee - currently (following the recent resignation of Revds. Chillblain and Pinnacle) comprising the Executive Archdeacon, The Primate and the Primate's Chaplain.


Therefore you are asked to give the Covenant many hours of prayer, study and considered reflection, and to submit your views in full-winter-length papers, to support the Executive Committee's decision.


The closing date for submissions is St Wolfgang's Day, 2011.

2. We are a united church
3. We are a holy church
4. We are a catholic church
5. We are an apostolic church
6. We are a biblical church
Or:
Note: attempt only one of these questions. Under no circumstances attempt both.
7. We are an episcopal church
For example:
As is well known, in our own Province the blessing of the partnership between Emperor and Macaroni penguins was frowned on, formally condemned in 1961, permitted in 1987 and the official liturgy was finally authorized ten years later in 1997. Our debates were often rancorous and the scars they have left behind are still painful for many. Nonetheless, in the end, it was our prayerful honesty with one another which led us forward together in the discovery of God's greater truth.  The Church of the Southern Cone undertook a similar conversation and came to a different conclusion. They do not accept such relationships as acceptable before God.


May God bless you all in your discussion and debate on this issue.


The Province of the True South 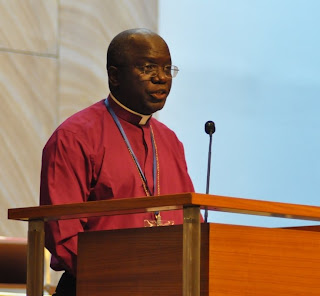 ANGLICAN-INFORMATION reports controversy and unrest in the Northern Malawi diocese. Provincial Bishops at a Court of Confirmation, chaired by acting Dean Bishop Albert Chama, have managed to declare that the latest Bishop–elect, Father Fanwell Magangani, is sound of faith and worthy of consecration.

This comes despite strong accusations made against him by Hilda Chirwa who alleged that six years ago Magangani raped her and then provided her with money for an abortion.

In a Court of Confirmation held in St Peter’s Church, Lilongwe, Diocese of Lake Malawi (held outside the Diocese of Northern Malawi to avoid any protestors) Magangani was cleared by the Provincial Bishops of rape charges.

The Malawi Daily Times 9th September reports that Hilda Chirwa faced ‘a barrage of questions hurled at her accusing her of hiding information’. The prospect and potential embarrassment of a second election nullified by rape allegations against the candidate appears to have galvanised the Provincial Bishops into determination to ensure that Magangani was confirmed.

The Malawi Daily Times in the same report filed that ‘at the Court of Confirmation, presided over by acting Dean Bishop Albert Chama, Ms Chirwa faced eight intimidating primates’. “Fr Magangani raped me, I screamed but there was no help”, she said. “Later I missed my periods and I told him. When I did he told me to go for an abortion”, testified Chirwa. This happened, she told the Court, when she was working for St Agnes Guild and at St Peter’s Cathedral in Likoma where Magangani had served as a priest. “When I arrived they arranged for a room for me to sleep in the priest’s house. At night he came and raped me.” She also said that Magangani gave her 5000 Kwacha to procure an abortion in May 2004.

Angry people in Northern Malawi in Nkata Bay are reported to have sealed off the offices of St George’s Parish where Fr Hannock Utongawakang’oma is a supporter of Fanwell Magangani. During Sunday service (12th September) worshippers at the parish barred the reading of the confirmation.

According to St George’s parish lay leader, Vincent Matengeni, as reported by Zodiak Online, who attended Magangani’s confirmation, ‘procedures to reach the decision have been flouted adding that double standards have been applied to the whole process’. ‘The previously elected Bishop Father Leslie Mtekateka was rejected for similar reasons of alleged immorality, he wondered why him and not Mangangani’?

Overall it is true to say that of the three recent elections of Brighton Malasa in Upper Shire Diocese, Francis Kaulanda in Lake Malawi and now Fanwell Magangani in Northern Malawi, none of them have had the full confidence of their priests and people. In each case strong objections of a serious nature have been submitted and subsequently overruled by Courts of Confirmation, without explanation.

ANGLICAN-INFORMATION comments: The fact that two successive candidates for Bishop of Northern Malawi have been accused of rape is particularly disturbing. Apart from announcing that they have confirmed Fanwell Magangani the Provincial Bishops have again failed to clarify how or why they have reached their conclusions and why his case has had a different outcome to that of Leslie Mtekateka.

It is wrong that a new Bishop be consecrated under such a cloud of allegations. It is essential for the good name and credibility of the Anglican Church in Central Africa that the Provincial Bishops explain publically how and why they consider that they are able to do so with integrity. It is insufficient simply to pronounce that they wish to accept Manangani.

Acting Dean Albert Chama intends to become Archbishop of the Province after Fr Magangani’s consecration. He should now issue a satisfactory public explanation concerning these latest events, lest his own credibility and candidacy be at stake.