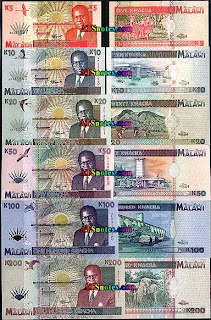 The Anglican Diocese of Lake Malawi has a serious financial crisis. This has been expected for sometime. Disillusioned donors have increasingly withheld funding in response to what is perceived as a failure on the part of the Central African Provincial bishops to conduct free and fair elections to the vacant sees of the Dioceses of Upper Shire, Northern and Lake Malawi.

Under the temporary oversight of the Rt Rev’d Albert Chama, Bishop of Northern Zambia and acting Dean of the Province what can be best described as a malaise has developed as a gulf has opened up between episcopal oversight and the wishes of the people. These are unsettled times confidence is low and the situation in Zimbabwe does not improve.

Priests in the Diocese of Lake Malawi have been informed that they will not be paid this month and that there is great uncertainty about the future. Clergy in Malawi are currently paid approximately 24,000.00 Malawian Kwacha a month, which after taxation and deductions comes to 18,000.00 MWK ($121.00 £80.00 and €88.00). As readers will appreciate this is barely a living wage for priests and their families struggling to scratch a living off their smallholdings. ‘I do not know how we are going to survive’, writes one correspondent.

The problem of what are perceived to be inappropriate ‘elections’ contrived by the bishops to the dioceses have had outcomes as follows:

Upper Shire: Bishop Brighton Malasa who has the unfortunate distinction of being the world’s youngest Anglican Bishop is reported to be favouring young priests and sidelining older and more experienced clergy.

Northern Malawi: The consecration of The Rev’d Leslie Mtekateka elected in August last year has been further delayed due to allegations of serious personal misconduct.

Lake Malawi: The Court Injunction brought by an unprecedented number of objectors to the election of the Venerable Francis Kaulanda has now been lifted. Nevertheless, Kaulanda’s position is perceived to lack legitimacy after what was seen as an election forced by the Provincial Bishops.

A correspondent writes: ‘The services of the principal Hospital Administrator Emmanuel Pemba were terminated by the Board on 8th February 2010 because of mismanagement of funds and abuse of office. Some donors suspended their assistance to the hospital when they realized that the man was not committed to helping the hospital (this is true for example of Hilfe für Malawi, a German Medical Charity). I hope the situation is going to change soon. The hospital at the moment is in deep financial difficulties which have resulted in shortage of drugs and other medical supplies. I do not know whether you know someone or people that can come to the assistance of the hospital. There is a big need to save this hospital’.

South Malawi: Meanwhile Bishop James Tengatenga of South Malawi has embarked on his sabbatical study leave in the United States where in Dallas, Texas he has been speaking to representatives of the conservative (but not quite yet schismatic) Episcopal Diocese of North Texas. Quoting the singer Bob Dylan he said “The hour is getting late” and “Time for our games in running out” – it is not clear what exactly he meant by this but it could be a reflection on the current state of the Anglican Communion or perhaps on the unsettled situation he has left behind in his diocese?

Diocese of Harare, Zimbabwe: The Zimbabwean High Court has ruled against dissident ‘Archbishop’ Nolbert Kunonga and given control of the churches to the Provincial Diocese of Harare under Bishop Chad Gandiya. This ruling has been totally ignored by Kunonga and intimidation and violence against supporters of Chad Gandiya by the state police has continued unabated.

Recently, the former Bishop Sebastian Bakare has renewed his plea for Christian solidarity over the actions of Nolbert Kunonga. To back this Bishop Chad Gandiya has called for a day of prayer and fasting. Acting Dean Albert Chama has also issued a document giving a history of Kunonga’s activities. The document calls for ‘independence and impartiality’ on the part of the police. Unfortunately, the document does not go back to the time of close working friendship between former Archbishop Bernard Malango and Nolbert Kunonga. This period is the unhappy backdrop to the present situation that has never been satisfactorily resolved. Consequently, it represents a toxic legacy that Albert Chama finds hard to shake off, for as Malango’s one time chaplain, the Malango/Kunonga relationship seriously weakens his own credibility.

Cancer not murder: The late Canon Rodney Hunter’s so called ‘murder’ case where Hunter, who died from a cancer related illness in 2005, was claimed by twice-suspended priest Dennis Kayamba to have been poisoned. This case has come to court where no evidence has been produced against Hunter’s loyal former cook Leonard Mondoma.

The judge was to have heard from the two doctors involved but they have twice failed to appear. The judge had intended to summon them once more but this has been delayed indefinitely due to a strike by the judiciary over replacement vehicles for their travel needs. The hapless Leonard Mondoma remains without a job and with the threat of the law hanging over him – it is nothing less than a scandal that such a trumped up case should ever have come about.

Want to have your say or read what others think?

Or why not visit our companion blogsite:

A view from a Nolbert Kunonga supporter in Harare, Zimbabwe 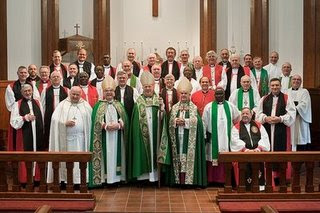 ANGLICAN-INFORMATION receives various mailings and contacts. Here is one from The Rev’d Tendai Mutongomanya of the Diocese of Harare, Zimbabwe carrying a letter from Paul Magaso.

Could the trouble be coming from here? ANCA (Anglican Church of North America) and African bishops gather together in common cause.

If nothing else it gives another perspective but ANGLICAN-INFORMATION observes that this is a further example of how African Anglicanism has been forced to fight proxy wars that have their origin in the social and cultural struggles between conservative and liberal factions in the American Episcopal Church. These wars have also spread across the Anglican Communion and have pitted Anglican against Anglican resulting in often ridiculous and dangerous accusations.

ANGLICAN-INFORMATION observes that the Nolbert Kunonga faction described below is closely allied to the Mugabe regime and has indisputably been responsible for a great deal of totally unacceptable violence.

Be man enough and take a stand!

‘The situation affecting our Anglican diocese of Harare since 2007, has seen a variety of reactions from different quarters. The resultant split of the Diocese of Harare [Kunonga faction] from the Church of the Province of Central Africa over homosexuality, has seen many opting to remain with the province and others going with the [Kunonga] diocese. However, a good number remained neutral, waiting for the dust to settle. I belonged to this middle group but have now decided that it’s time to make a decision.

For the past two years I have been toying with the idea of leaving the Anglican Church completely and joining a Pentecostal Church. The reason for my speculation was that I felt confused ever since the [Kunonga led] Synod of August 2007, whereby allegations of sympathy with homosexuality were leveled against the Church of the Province of Central Africa bishops. The Diocese of Harare, after a lengthy debate during the Synod, put forth a bold statement enshrined within an Act, that there would be no acceptance of homosexuality or lesbianism within the church, since it went contrary to the scriptures. This was communicated to us in the churches. It was also noted that many bishops of the CPCA, had started to sympathize with homosexuals.

The response from the Province, which denied that the issue at stake concerned homosexuality, left many perplexed. When Bishop Kunonga was “excommunicated” and priests loyal to him were fired and also cut off from the church by the acting Dean of the province, Bishop Albert Chama, for unclear reasons, that was the last straw for many of us. The church began to crumble and many of us opted to stay at home. We waited patiently for the emergence of the truth. Surprisingly, only Bishop Kunonga, his priests and followers, seemed courageous enough to remain steadfast on their anti-homosexuality stance. Bishop Sebastian Bakare and Bishop Chad Gandiya remained silent on this issue to this day, opting to level unproven political reasons for the chaos within the church. Rumours are rife that evidence in the form of documentary proof exists that proves Bishop Gandiya’s sympathy towards homosexuality, and that some day it will be exposed!

I have come to my own decision, and urge all those who stayed in their homes or joined other churches out of frustration to do like-wise. Homosexuality is a real issue that needs to be addressed and Bishop Kunonga and his followers have taken a position. Bishop Bakare and Bishop Chad Gandiya seem uncertain, and hide behind a smoke screen of politics. I have decided to join the Diocese of Harare headed by Bishop Kunonga and will return to church this coming Sunday. It’s a pity that many choose to continue to attend services under trees or on the hilltops for unknown reasons [members of the Provincial Diocese of Harare where church members have been forced to worship outside their buildings for fear of intimidation and violence from the Kunonga faction]. I for one will not emulate such practices since the church doors and gates remain open at the normal times. My challenge to the present Bishop Chad Gandiya is that he should be man enough to tell the world about his stance on homosexuality. His followers have the right to know!’


Want to have your say? Comment below or
try our companion blogsite: http://anglican-information.blogspot.com