What do we get if we get the Covenant?

Apologies that the papers under discussion here are somewhat dated. I am grateful to my colleague Leonardo Ricardo for drawing my attention to the paper from the Province of South Asia which (with so much else) I had missed.


I blog it now because it continues to be relevant: the terms of signing the Covenant seen from Singapore are not the terms seen from where I sit.

Ireland subscribes
In May the Church of Ireland "subscribed" to the Covenant.

But was something else going on? Did the Irish (or, at least, those in the know) believe that once the Covenant was in place all that would happen would be another round of negotiations?

To put it another way: what do we get if we get the Covenant?

Here the Church of South East Asia (wiki) has been very helpful.

A history of the Covenant
Their Preamble to the Letter of Accession (also May 2011) set out a history of how the Covenant was created. It stresses the significance of conservative Provinces in the creation of the document dating back to the Second South-to-South Encounter Kuala Lumpur Statement in 1997.

I find the historical narrative largely persuasive when seen through conservative glasses,  The story is predicated on the "unscriptural practices in some parts of the Church" and the providential way the 'crisis' enabled the diverse churches of the global south to create a shared identity and structures of consultation

It's not the whole story. (1) It omits contributions from England and other western sources. (2) The Archbishop of Canterbury is mentioned twice (outside quotations): to restate an instruction given to him by the Primates and, second, to disapprove a decision he made. It would seem that the future of Covenanted Anglicanism does not accord primacy to the Archbishop, his heirs and successors. (3) It ignores the listening process that was also agreed at Lambeth 1998. (4) It also leaves the impression that 'border crossing' followed, rather than preceded, the consecration of Bishop Gene Robinson.

But for those global south churches which wish to remain within the Anglican Communion it is a persuasive and legitimating account.


The terms of accession
The Preamble "also outlines the raison d'être for the Church of the Province of South East Asia’s agreement to sign the Anglican Communion Covenant.":


Churches that accede to the Anglican Communion Covenant need to subject their common life to the reforming and transforming work of the Holy Spirit, so that the Communion may be built up until all “reach unity in the faith and in the knowledge of the Son of God and become mature, attaining to the whole measure of the fullness of Christ” (Eph 4: 13). The Anglican Communion should adopt more uniform processes in the election and appointment of bishops, to ensure that such processes are not held hostage to local politics and to parochial understandings of the episcopal office.

For the Province of South East Asia, therefore, it is perfectly clear that the Covenant does indeed subordinate provinces to its provisions. Local church order must be changed to fit the programme.

Thus they sign the Covenant with one pen and with another write: everyone else must meet the demands of South East Asia.

Martin Reynolds (last comment at TA) also noted that, as part of the National Council of Churches of Singapore, the Anglican Church sought to criminalise lesbianism for the first time in the country's history and to sustain harsh punishments for gay men. There is nothing irenic in this Provinces' Covenant.

So what does it mean to sign the Covenant?
Clearly the Church of Ireland either signed a different Covenant, or it must withdraw its decision if these are the terms, or it expects the Covenant to be merely a staging post to further negotiations.

What would the Church of England be signing up to if it voted in favour?

What is the point of a treaty if we all think we're signing up to different things?
Posted by Paul Bagshaw at Saturday, December 10, 2011 No comments:

LONDON – After slightly more than a year, the No Anglican Covenant Coalition can point to several  successes, according to Coalition Moderator, the Revd Dr Lesley Crawley.

Four dioceses of the Church of England have rejected the Covenant (Birmingham; St. Edmundsbury and Ipswich; Truro; Wakefield). Where synod members were provided with balanced background material (i.e., material that presented both the case for and the case against the Covenant), the synods have voted it down.

Four dioceses, where little or no material was presented other than officially sanctioned pro-Covenant material, have approved the Covenant (Lichfield; Durham; Europe; Bristol). A total of 23 diocesan synods must approve the Covenant for the matter to return to the General Synod. 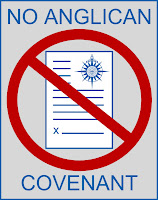 “In November 2010, we launched the Coalition to ensure that the case against the proposed Anglican Covenant would be given a fair hearing,” said Dr. Crawley. “Today we are seeing our efforts bear fruit. When fair debate has been allowed, the results have been gratifying.”

Critical to the success of the campaign, especially in the Church of England, has been the support of the Coalition’s Episcopal Patrons, Bishops John Saxbee and Peter Selby, who have encouraged diocesan bishops to allow for a full and open debate. In the coming months, 37 more English dioceses will vote on the Anglican Covenant. Only 18 additional no votes are needed for the Church of England to reject the Covenant.

The No Anglican Covenant Coalition continues to provide assistance to those researching the proposed Covenant. The Resources section of the Coalition website is regularly updated with new material and analysis.

In the coming year:
“Anglican Communion Office officials have repeatedly responded to criticism of the Anglican Covenant by suggesting that critics have not read the document,” said the Coalition’s Canadian Convenor, the Revd Malcolm French. “Ironically, we find that the more familiar people are with the document, the more likely they are to reject it. The Coalition is committed to ensuring a proper and balanced debate in churches throughout the Anglican Communion.”