The Anglican Church in Zimbabwe sets out on a new course

No Anglican Covenant - next steps

Until now the No Anglican Covenant Campaign has, for obvious reasons, focused strongly on England and the vote in English dioceses.

A number of changes have followed the defeat of the Covenant in England.

Lesley Fellows has stood down as International Moderator and she deserves great praise and gratitude for the manner in which she performed this role.

Malcolm French has taken on the tasks of International Moderator.

Jean Mayland, a lifelong campaigner for change in the Church of England, is now the English Convener for the group.

NACC attention is now turning to the US where the mood is difficult to read.

The Episcopal Church's General Convention meets in July in Indianapolis, Indiana. Three motions have already been proposed and the NACC motion is currently looking for sponsors. (OK, I'm being pedantic here. These proposals are all called resolutions. I believe that a motion becomes a resolution when it is agreed (resolved) not when it's put forward. But, when in Indianapolis ... So, I concede, and the texts will hereinafter be called resolutions.)

The one for the Covenant comes from a group who call themselves Communion Partners (firmly conservative) and was announced in 2009. The one opposing the Covenant comes from the Episcopal Church’s Executive Council. And the one in the middle seems to be a response to these two with the intention of keeping the ball in the air until everyone else has declared what they think. (Comparison at Preludium)

All these, and any others received in time, then go into a mincing machine which people have explained to me and I still have no clear idea how it all works.

Time to open up the ACC


The next meeting of the Anglican Consultative Council in Auckland, New Zealand, begins on October 27th. An outline of events is here (pdf).

Traditionally the ACC has been very circumspect about sharing its deliberations and the event programme says "The ACC needs to get on with its own work in relative privacy,".

But it's not 'its own work', it's the Church's work (and, we would hope, God's work). The secrecy, with only selective and carefully managed press releases coming out of the conference, followed by the bare list of resolutions, is wholly inadequate.

The ACC is (a) a meeting of representatives from around the world, (b) consultative in its character and (c) of interest to a very large number of people around the world. Representatives should be audible to those they represent, consultation should (as much for its quality and comprehensiveness as for the benefit of others) be as public as possible, public interest is to be taken seriously as a sign of the engaged membership of the global communion.

I accept that members may not want to release the details of everything while debate is still going on. I accept that, occasionally, some matters may be confidential (though, having written that sentence, I puzzle over what would require confidentiality, and on what grounds). But what would be the harm in releasing transcripts or, at least, detailed summaries of each debate once the event is concluded?

Secrecy in government is both necessary and corrosive. As a rule I believe the balance should be struck by beginning with the presupposition that everything is public; exceptions should then be justified on a case by case basis according to previously agreed criteria.

But the ACC is not making judgments on commercial matters, nor dealing with information that's market sensitive. It's not debating matters which entail the disclosure of sensitive personal information. It's not a private club. There are no security implications of its debates. I even struggle to think of issues that it would simply want to hide.

So why is it so secretive? Why is information about its deliberations so sparse as to be almost vacuous? Whose Communion is it anyway?

Time for a new campaign: for an open minded, hearted, and voiced Communion.

Final voting figures on the Covenant

Alan Perry has produced a final tally of the statistics on the Covenant vote (and I've added some comments).

In all, 3588 people voted in the 44 diocesan synods, including 94 bishops, 1584 clergy and 1910 laity. (Bishops' votes did not count toward the results, but were nevertheless recorded.)

The proposal to endorse the Covenant was defeated by 26 Dioceses to 18. This is a significantly bigger margin than the difference in individual votes.

It is important to remember that this voting system was devised as part of synodical government. It was never a system of individual votes where people happened to be gathered geographically.

Matters referred to dioceses under Sections 7 & 8 of the Synodical Measure are proposals for significant change in church life. Therefore the bar which a proposal had to pass was set noticeably higher than 50%+1. The intention was to find a way of ensuring, so far as possible, that a positive vote really reflected sufficient support for change around the country and amongst both clergy and laity. 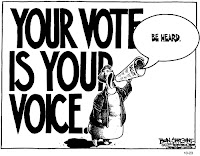 Therefore one way of looking at the discrepancy between the votes of bishops and those of the laity and clergy is to suggest that synodical government structures have proved effective. Bishops may be out of step with their people but the synodical system provided an effective brake on their forward march.

Whether the lesson you draw is that diocesan voting should be circumvented or strengthened depends on deeper questions of how you perceive the nature of the church.

Percentages of the vote by houses:

Number of dioceses voting for and against by houses:

It is clear overall that the Covenant was unable to secure majority support amongst either the clergy or the laity. The bishops voted overwhelmingly for the Covenant.

In 22 dioceses both clergy and laity voted against and only in 4 dioceses was the Covenant defeated in a single house (clergy).