The end of criticism in Wales

The Church in Wales, led by Archbishop Barry Morgan, was once highly critical of the Covenant. It made strong, cogent arguments against and propounded an alternative view of the future of Anglicanism.

But all that seems to have vanished now.

Submission 1
In February 2007 The Church in Wales' official response to the consultation (pdf; all official responses.) on the 'Nassau' draft of the Covenant was extensively critical. It  particularly opposed the allocation of power to the Primates, a threat that has now passed. It looked for a way out of the whole process:


Perhaps we need to get away from ideas of negotiation altogether and think of ‘interchange’ instead. We need to become in heart and mind as the other is in our disagreements. We seem in far too much of a hurry to reach agreement before we have reached that depth of understanding in which healing and forgiveness can be effected. The Covenant, if undertaken too hastily, would be a politically expedient but short-termed solution and without the prior work of reconciliation would be unlikely to hold.

It saw the Covenant programme as a move towards a Confessional Church, 'an increasingly secular style of  doctrinal decision-making' and 'a topdown model of collective authority'. 'We fear', it said, 'that an over-structuralised Communion will lead to a loss of the present Anglican engagement with local issues and prompting of the Holy Spirit.' It reminded people of the 'fallibility of the Instruments of Communion.'.

The language of the Covenant indicates a change of emphasis from autonomous provincial government with consultation to a global body with central authority for leadership with powers of exclusion.

they proffered a different ecclesiology to that which they saw in the Covenant:

Submission 2
The Church's response to the St Andrew's Draft (pdf; n.d.) of the Covenant repeated the Church's desire to give the ACC a more prominent role, reflecting the understanding that 'The Anglican concept of authority is a dispersed one focused through conciliarity.' A 'conciliar model' was one in which 'authority should be modelled on participatory and egalitarian principles' however difficult that might be for some.

But the fundamental question for the Church in Wales, engaged in a programme of constitutional revision, was the perceived threat to its autonomy:

The question then arises as to whether it [The Church in Wales] would be willing to surrender its autonomy in matters of faith, doctrine or morals at a time when it has made itself more autonomous in other areas?  .....  In other words, it [the Covenant] would be giving others “the ability to give direction about the course of action that the Church in Wales should take”.  The present appendix gives that power to others and could prove problematic.

This threat to autonomy and the legal problems it provoked was to lead to a revision of the language of Covenant action against offending provinces. The capacity to be directive was simply inverted: in the final draft directions became 'recommendations' made not to the offender church but to everyone else. (See, a legal fiction.)

Submission 3
The third submission (pdf; n.d.) was to Section 4 of the Ridley Draft:

The Covenant appears to be understood in some quarters as a tool for the reordering of the Church which will be used to effect a rapid severance between Provinces whose contexts and understanding of Christian discipleship are, for now, too different to lie within a single ecclesial body. We hope that this is not the case, and that the Covenant will remain an instrument intended to unite Anglicans around  a common and flexible understanding. We are concerned lest the current draft of Section 4 of the Ridley Draft could lead to chaotic, painful and protracted disputes with little, if any, sense of how such disputes are to be resolved. (emphasis in the original) 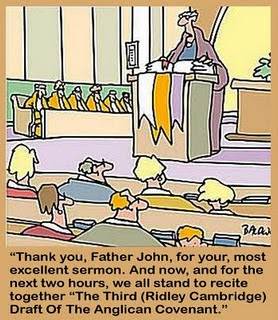 Therefore the Church recommended a 'reorientation of Section 4 ... towards a theology of reconciliation.' In effect, a re-writing of the Covenant.

The submission then critiqued the proposal:
Instead of Section 4 as written the Church in Wales commended a theology of reconciliation and hope such as that described in Communion, Conflict and Hope: The Kuala Lumpur Report of the third Inter-Anglican Theological and Doctrinal Commission. (ACC, 2008). This document too sees hierarchical views of power and authority as part of the problem, not the solution (para. 119).


Finally the submission picked up the point that a culture of global communications is often seen as a threat to Church unity without a clear argument why that should be so.

We should like to point out that free communication and easily available travel gives rise to unrealistic expectations of uniformity and sets up a series of false cultural norms. A false cultural norm of pseudo-uniformity is created when, in reality, the different norms of one place do not impinge upon the daily life of another. The ‘flattening’ of human culture – the sense that there is a certain ‘default’ setting – is characteristic of modernity. By contrast, Anglicanism has long celebrated diversity, but not for diversity’s sake. Rather, the varied expression of Anglicanism is born of the conviction that the Gospel, because of its richness which exceeds all particularity, can be mediated in many ways.

So, what happened?
The No Anglican Covenant Campaign would argue, I'm confident, that most of these questions and critiques still apply.

The motivation behind the Covenant and, probably, the reality of its implementation have not changed that much from the beginning. Mechanisms have changed, and the language has become more subtle, but the instinct to centralise, to move toward uniformity, and to embody hierarchical views of power and authority within and across the Communion still seems very strong.

But I guess that when you're involved in international negotiations you accept what you think is the best outcome you're going to get - even if it's a long way from what you have been arguing for over so many years.

Whatever the process, a longish briefing paper (pdf) from The Doctrinal Commission of the Church in Wales

... commends the Anglican Communion Covenant to the Governing Body of the Church in Wales. We regard it as a theologically coherent description of the nature of the Church and the form of the Christian life as expressed in Scripture and Church tradition. The Covenant falls within a discernable trajectory in the development of Anglican identity.

Though this was clearly not a unanimous view within the Commission, perhaps only a bare majority:


Most members of the Commission welcome the Covenant, regarding it as an opportunity to deal more clearly with the many tensions that have beset the Anglican Communion in recent years. Some would rather the Covenant were clearer concerning the consequences of fractured relations. Other members of the Commission express some reservations concerning the Covenant, pointing out that, of itself, it solves none of our difficulties. Much depends on the way in which the Covenant is received and lived. Properly used, the processes outlined in the Covenant should assist this process of discerning the work of the Spirit within the Anglican Communion. However, this will only be possible if a conscious effort is made to foster proper lines of communication and deeper bonds of friendship across the Communion. However, the Covenant is an attempt to describe and clarify the nature of our mutual commitments and the form of life required to begin the process of discernment towards deeper communion and a more intense participation in the life of God made known in Jesus Christ by the power of the Holy Spirit.

Thus the question went to the Church's Governing Body in April 2011. There, Archbishop Barry Morgan reversed his previous opposition to the Covenant and backed it.

In his opening remarks, Archbishop Barry quoted the Archbishop of Canterbury: “The Church is challenged to show that it is a safe place for people to be honest.” This final version of the Covenant looks at the Anglican Communion in terms of relationships, accepting the autonomy of each province. There is a reduced emphasis on sanctions for a province which wishes to withdraw from the Covenant, or where there are objections to its actions. The Covenant seeks to deal with differences through conversation and mediation, and to try to build up trust across the Communion. (Highlights of the Church in Wales Governing Body April 2011, p.6, pdf)

We need the Covenant, not as a new instrument or artificial construction, but to hold friends together.

Where now?
A private note I have seen says that the argument from the ACC members at the Governing Body meeting also included the assertions that, first, the teeth of the Covenant had been drawn so it would be safe to approve it and, second, that the last ACC meeting the members attended was so benign that a vote in favour would only encourage greater mutual respect.

But
The Governing Body of the Chuch in Wales next meets 18-19 April 2012 in Llandudno.