The death of a pioneer

From the New York Times: 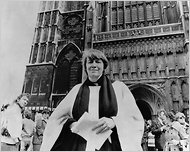 The Rev. Mary Michael Simpson, the first Episcopal nun to be ordained a priest and the first ordained woman to preach a sermon in Westminster Abbey, died Wednesday in Augusta, Ga. She was 85.....Even though the Church of England said it had no official objection to women joining the priesthood in the Anglican Communion — which includes the Episcopal Church — lay opinion and the private views of the clergy were often more conservative. By 1978, women had become priests in Anglican Communion churches in the United States, Canada and New Zealand, but not yet in the United Kingdom.

Canon Simpson addressed the issue directly in a sermon at Westminster Abbey on April 2, 1978, in which she asserted that the church treated women like “second-class Christians.”
“Christian creativity for the present age must not depend on male leaders,” she told a gathering of about 700 people. “Woman’s contribution — from women properly trained and authorized — is essential.”