Just for a laugh 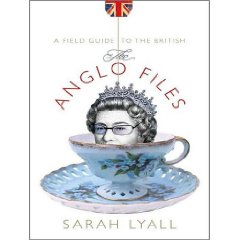 Anglo Files, Sarah Lyall
You know, I haven't heard this argument for a good 30 years. It's high time it was resurrected - it's important to keep flogging a good, dead horse.

This is from the normally sensible Telling Secrets.

In a chapter entitled, “Naughty boys and rumpy-pumpy,” Lyall catalogues some of the silly euphemisms for body parts: “private parts” for genitals, “willies” for penises, “front bottom” for the dread vagina, “naughty bits” for the whole package (unless you are talking specifically about a man’s whole package and
then you can say, “dangly bits.”). “

She continues, “Not even serious people seem comfortable with using real words for real sex, known popularly as “shagging,” “bonking,” or “having it off.” Private Eye magazine calls it “discussing Ugandan affairs,” a reference to a woman journalist who, when caught in flagrante with a Ugandan politician, claimed they were talking about
Uganda.”

One can only imagine, then, the internal British conflict about homosexuality, can’t one?

She reports a typical exchange between her friend Ed and his dad when he was eight years old and hunting grouse on the moors which, “on account of having to pay attention to what they were doing or else they might shoot the wrong thing, they could look at the birds instead of each other”:

“’You’ll soon be going away,’ Ed’s father remarked, peering at the potential grouses concealed in the bush. He fired a shot.

‘Boys will want to interfere with you.’ He fired again.

I don't question the evidence. Nor the account (in past days, though the effect presumably last at least a generation) of physical and sexual abuse in boarding schools.

But I do question whether her conclusion isn't building a little more on this evidence than can be justified:

It occurs to me that a major component of the homophobia and heterosexism in the
Church of England has nothing to do with a healthy understanding of love between
two people of the same sex; rather, it has everything to do with a perverse
educational system which is the product of a shame-based understanding of human
sexuality which arises out of a deep connection with humiliation and power.

I'd accept the argument for the 1950s (at least to some extent), and its legacy in the 1960s, and I don't doubt there are individual and residual echoes of it still. Even then it was always predominantly a matter for the upper social classes, hence the shooting story. But the social changes that have changed the CofE as much as the rest of society since the 1960s have largely done away with the power of Eton and Harrow to set the cultural agenda.

With her subsequent reflections that sexual relationships and their social patterning are all about power, I have no quibble.
Posted by Unknown at Wednesday, October 01, 2008