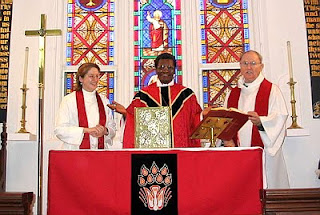 Tengatenga who is a frequent visitor to North America and who often travels worldwide in his role as Chair of the Anglican Consultative Council has challenged his clergy that he should be given his allowances or he will resign.

The clergy have responded with their intention to consult with the laity of the diocese.

Tengatenga has a history of conflict over funding having threatened previously to withhold sacramental rites such as confirmation if parishes do not meet their diocesan payments.

ANGLICAN-INFORMATION observes that the laity in the Central African Province have developed an increasingly powerful voice in recent years. This has resulted in a number of protracted struggles with their traditionalist command structure bishops. The growth of easy access to communications such as mobile telephony and the internet is slowly democratising Church governance. We believe that this is a positive development.

Lake Malawi: Laity protesting against the election of the Venerable Francis Kaulanda as bishop have brought a Court Injunction preventing the bishops from ‘confirming’ Kaulanda’s position. This case was revisited in court on 21st January. Charles Wemba, lay spokesman, reports that he and others have been threatened with excommunication by the bishops. A ruling of the court is expected soon.

ANGLICAN-INFORMATION observes that in the long-running saga of the Diocese of Lake Malawi the bishops have consistently attempted to bypass and overrule the laity. The only exception to this policy came in June 2007 when Bishop Trevor Mwamba of Botswana came close to bringing the parties together before himself being sacked as Dean of the Province by the then Archbishop Bernard Malango.

ANGLICAN-INFORMATION observes that the blogosphere is an unmonitored and unaccountable medium but Chama is inevitably vulnerable to such criticisms. They are likely to weigh against him when eventually all the diocesan sees are filled and an election takes place for the post of Archbishop of Central Africa. The future of this much-troubled Province will be determined by the style of whoever leads the Province. Albert Chama’s acting tenure as Dean over four years has been at best patchy and change may be preferable to ‘more of the same’.

Want to have your say?
Comment below or visit our companion blogsite:

Posted by ANGLICAN-INFORMATION at Wednesday, February 03, 2010