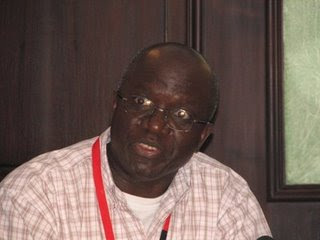 The acting 'Archbishop' of the Central African Province - Bishop Albert Chama
From: ANGLICAN-INFORMATION
Acting Dean of the Province of Central Africa the Rt Rev’d Albert Chama of Northern Zambia has forced two clandestine Courts of Confirmation against the wishes of objectors. The Confirmation of Fr. Leslie Mtekateka for Northern Malawi has taken place in Mzuzu but not yet been announced and in Lake Malawi, despite a Court injunction prohibiting it, the confirmation of the Venerable Francis Kaulanda has apparently been completed.

Albert Chama who interestingly now describes himself as ‘The Acting Archbishop of Central Africa’ and refers to the other bishops as ‘my bishops’, has not yet revealed the proposed dates for the consecration of the new bishops. He has however, declared that he does not recognise the jurisdiction of the civil courts thereby putting himself and the other bishops in a potential head on clash with the civil authorities.

It is ironic that Albert Chama in a sermon preached in the Episcopal Grace Cathedral San Francisco on 5th July 2009 said, “we need to be aware of those who suffer in silence – we need to stand up for those who have been declared outcasts even if their context is dangerous for us”. It is not clear at this point whether he was speaking of gay people in San Francisco and Africa or the African women he describes as being “treated as property”. Certainly he does not appear to include lay people who disagree with him.


To: All Bishops
Church of the Province of Central Africa
From: Mr. G. A Mwale
All Saints Cathedral
P. O Box 133
Nkhotakota 2nd February 2010

The Composition of Court of Confirmation

I am a full age member of the Anglican Church Diocese of Lake Malawi, a communicant of the church of honest life and good repute. Our Lord Bishops of the Province of Central Africa you have not solved the problems by defying the court injunction, which was obtained by some of our faithful against the confirmation of Reverend Francis Kaulanda. It is the fact that this is an internal matter which only Anglicans in the Diocese and possibly with the help of other Anglicans else where in this Province can solve. But it is very unfortunate that our Provincial leaders have chosen to live in a state of denial by observing that the High Court of Malawi has no jurisdiction to stop the process. They knew that there are other precedents with the Anglican of purely Church matters being taken to the High Court of Malawi. This is all because of failure to resolve the matter of the Church among ourselves.

Canon 7 is all about the Court of Confirmation whereby all Bishops or by the commissaries are summoned by the Archbishop or Dean of the Province to appear before the court. The procedure of lodging complaints was followed and all letters were sent to the Registrar but the true fact is that objectors were not invited instead they invited the supporters of the Bishop elect which means that the composition of the court of confirmation held in Lilongwe on 22nd September 2009 was not the right one.

It is clear that the Bishop elect did not attend Bandawe Secondary School as alleged in his curriculum vitae. It is likely that he does not have any certificate being offered by the examinations board in Malawi. Somebody without such qualifications cannot competently represent the Diocese at national or indeed at international level. And the Diocese is likely to fail into disrepute if someone of his lack of learning is made a Bishop of this core Diocese.
Its our prayer that the court of confirmation should held in accordance with the Canons, objectors should be invited, they should be given enough notice (Place, Time and Date) so that they should thoroughly prepare for the case.

I pray to you Our Lord Bishops that you should not see the objectors as rebels of the Church as they have the canonical right to raise the objections per Canon 7:5

May the good Lord Bless You

Yours Servant in Christ

The trial re-opened in Lilongwe High Court on Tuesday 23rd February when further consideration was to have been given to the claimed poisoning of the late Canon Rodney Hunter, a British priest whose cook Leonard Mondoma is implausibly supposed to have murdered.

For the second time the two doctors in the case, the pathologist who conduced the post-mortem on Hunter and the doctor who treated him prior to his death, both failed to turn up. The judge has reportedly given them one more chance to present their evidence on a date to be decided.

This case, often covered by us, seem to rest almost entirely on the accusations of a twice -suspended priest the Rev’d Dennis Kayamba and the over enthusiastic reportage of the U.K. Times religious affairs correspondent.


Want to have your say?
Comment below or visit our companion blogsite:
http://anglican-information.blogspot.com
Posted by ANGLICAN-INFORMATION at Thursday, February 25, 2010