Part of the problem with debate on the Covenant is that so much attention has been focused on section 4.2.

This clause is the basis for the paradoxical enforcing of the bonds of amity which is the linchpin of the document:


(4.2.5) The Standing Committee may request a Church to defer a controversial action. If a Church declines to defer such action, the Standing Committee may recommend to any Instrument of Communion relational consequences which may specify a provisional limitation of participation in, or suspension from, that Instrument until the completion of the process set out below.

But - just because this is widely unacceptable - it should not be allowed to make the earlier sections look tolerable.

I have in mind some people in the US and NZ (and probably elsewhere) who, with no doubt the best of motives, would be prepared to accept the first three sections of the Covenant, just not the last.

The Covenant is written as a single, integrated whole.  Sections 2 and 3 describe and thus prescribe the basis of our unity; Sections 3 and 4 elaborate particular implications for the expression of unity. In fact the logic which links the two parts is very weak, but it was never written as an intellectual exercise. It is a political document which only needs sufficient logic to be acceptable. Like all too many church (and other) policy documents the beginning was written to justify a priori conclusions.

Section 1 would establish an extensive credal and ecclesiological base for the Communion which has never hitherto been needed. If adopted it will set the battle-ground for future divisions. It is too detailed to be comprehensive and too vague for theologians. It will demand endless 'elaboration' and 'clarification'. The more it is clarified the more critical it will become for an ever-diminishing groups of people whilst being ignored by almost everyone else.


Section 2 I don't find inherently objectionable, though otiose. However the phrase, 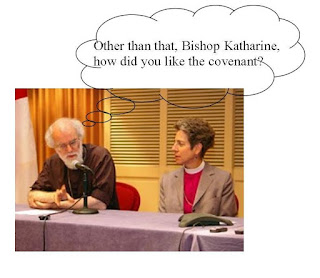 "We affirm the ecumenical vocation of Anglicanism to the full visible unity of the Church in accordance with Christ’s prayer that “all may be one” ...." (2.1.5)

may read differently in the light of the demand by the Vatican for a single unitary Anglicanism as a precondition of further ecumenical talks.

It is intriguing that the majority of explicit biblical references are in this section, perhaps on the principle of 'argument weak here, shout louder' (references in the Introduction, the other area of concentration, don't count).

Section 3 creates a conflict prevention/resolution structure which, if adopted, would inevitably lead to demands for enforcement. Some version of the current Section 4 would inevitably be necessary if this section was endorsed.


Vote against the Covenant.

Just because Section 4 is worse does not make Sections 1 - 3 good.