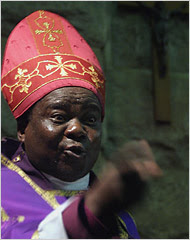 We have been asked to publish the following from Trish McKenzie in Harare, Zimbabwe raising further concerns at the actions of renegade self-styled 'Archbishop' Nolbert Kunonga. Kunonga was formerly Bishop of Harare and a close associate of former Archbishop Bernard Malango before breaking away from the Province. Prior to his original election to the Diocese of Harare, Kunonga was a lecturer at the Unification Church (Moonie) seminary in Barrytown, New York where he was awarded his doctorate.
For a documented example of Kunonga's recent actions at St Clare's, Mangwende, see the earlier post on this blogsite.:

Trish McKenzie reports: 'Dr Nolbert Kunonga is again trying to destabilize the diocese by invading various churches and interrupting confirmations, weddings and other legitimate activities in contravention of various judgments handed down since 19 January 2008 and subsequent appeals by the Diocese of Harare CPCA where the judgments have been adverse. The Bishop, Dean, priests and parishioners are determined to continue holding their services at the times permitted in terms of the Makarau Judgment of January 2008. Please continue to pray for justice and an end of the harassment by Kunonga'.

And more details from Avondale Parish:

EVENTS IN THE DIOCESE OF HARARE (CPCA)

MINUTES OF A MEETING HELD AT THE DIOCESAN OFFICES, 9 MONMOUTH ROAD, AVONDALE ON SATURDAY 5 DECEMBER 2009 AT 1200 HOURS.

Over the last two weeks, and at intervals recently, Dr Kunonga has
again interfered with the parishes in this diocese in contravention of
the judgments that have been handed down over a period of time since
January 19 2008 and in an attempt to destabilize the diocese. The
following are some of the incidents that have occurred:

Saturday 28 November 2009: St Clare’s Church Murewa: The police
entered the church as Bishop Chad was about to administer the elements
and drove everyone out of the church. When asked why the reply was
“political”. The incident is being pursued with the Officer in Command
of DESPO in Marondera as the officer-in-charge at Murewa had no right
to interfere with the service.

On Sunday 29 November during the Confirmation Service at Kuwadzana the
congregation was ordered out of the church by the police and the
service was held in the open. The Police did not assist us in
preventing the parishioners being forced out of the church by Kunonga
thereby disobeying the court order and not upholding the judgment.

Tafara: The parishioners have been informed by a letter posted at the
church that Dr Kunonga will be holding one service all day on Sunday 6
December 2009. This is in contravention of the Makarau Judgement
permitting CPCA priests to hold services ninety minutes after those
held by Kunonga’s priests.

Church of the Transfiguration Warren Park: The parishioners have been
informed the only one service will be held on Sunday 6 December by
Kunonga from 0800-1700 hours and members of CPCA may attend if they
wish. Again contravention of the Makarau judgement.

St Faith’s Budariro: Three weddings were due to be held last week.
Some of the known supporters of Kunonga entered the church after the
first wedding and said that there is a new chapter beginning and
people can only attend their services and not those of CPCA.

Glenview: A competition was supposed to be held by a cell phone
service company today 5 December 2009. Permission was granted as
Kunonga people never use the church on a Saturday. When the PR lady
was supervising the erection of the marquee she was told that Kunonga
would be at the church all day and the event has been cancelled. The
priest and parishioners have been stopped from using the church.

St Elizabeth’s Belvedere: Were due to have a fete today which has been
well publicized. The police were informed in advance but when the
person appointed to liaise with the police went to check yesterday he
was told that Kunonga would be having a fete today and that the church
was booked in advance of CPCA booking the church. In addition the
doors have been bolted from inside and the lock changed on the gate.

Hatfield: On Friday 4 December two or three visitors went to see Rev
Zhou and informed him that they wanted to use the church all day on 5
and 6 December. There however are two weddings booked and they were
informed that they could use the facilities after the weddings but on
Sunday the Salvation Army use the church after CPCA and therefore it
would not be available.

St Paul’s Marlborough: On Sunday 29 November Munyani and six priests
went to St Paul’s just before the start of the 0700 service and called
the priest out and told him to tell the parishioners to go home and
come back at 1230 hours in contravention of the court ruling. The
Kunonga priest was called as there is a written agreement with him. He
was told that he should not have agreed without permission from the
Head Office (Kunonga).

Bishop Gaul College: On Friday 4 December Kunonga and two others went
to the College with a bunch of keys. The ordinands were told that
Kunonga would “come like a whirlwind to the College”.

The diocese is not taking these contraventions lightly and will be
pursue through the courts any attempt by Kunonga to prevent the
legitimate services being held.

The Bishop, Dean, priests, wardens and parishioners are determined to
continue with the services at the times that they have been holding
them in accordance with the Makarau Judgment and will not tolerate
the breaching of the court orders by the Police.

Please continue to pray for the diocese for strength and wisdom to
overcome the evil that is being perpetrated.

Want to have your say? Comment below or visit or companion blogsite:

Posted by ANGLICAN-INFORMATION at Monday, December 07, 2009