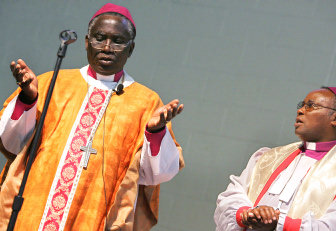 The Most Rev Benjamin Nzimbi


The Most Rev Benjamin Nzimbi (Kenya) has added his name to those supporting the departing Bob. The Most Rev Peter Akinola (Nigeria) is said to have also signed his support though his name does not yet appear on the Global South website.

Most Rev’d Dr John Chew has issued a statement:

The Province of Southeast Asia will continue to support, remain in full
communion and prayerfully explore steps to strengthen our shared life with
Anglican leaders like Bishop Bob Duncan and the Diocese of Pittsburgh as well as
other TEC bishops who respect the mind of the Communion and remain faithful to
the teaching of Scripture as expressed in the tradition and life of the Church.
We urge those who have not chosen to ‘walk apart’ to work actively and sincerely
with the Windsor-Covenant Process and other measures agreed at the Communion
level. This is probably the only remaining opportunity to bind the Communion
together out of this crisis which will strengthen our future common life,
witness in the world and our place as an Anglican ecclesial family within the
One, Holy, Catholic and Apostolic Church.

Note the place of the covenant. Chew shares Gomez's language about urgency. It increasingly looks as though the covenant (and I still argue that there will be a covenant) will not bind the communion together. Rather it will be adopted by conservative Provinces to the exclusion of the rest. It will be constitute a claim to be the true Anglicans. Those who will not sign will thereby have walked apart from the true faith.

Thus the covenant will work as a means to expel the North Americans. But the line will be drawn elsewhere and it is not clear to me which side of the line each Province will fall.

Now let's count the Provinces: those aligned with the Global South will sign. Those who share North American liberalism will not. The battle will be over the remainder. What will the CofE do?
Posted by Unknown at Tuesday, September 23, 2008