All change in Zimbabwe? 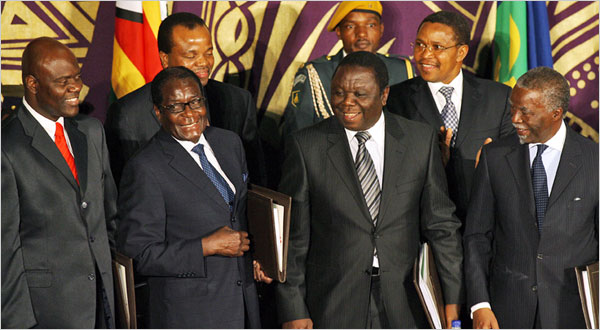 All change in Zimbabwe? Any chance of change in the Anglican Central African Province?

Wilson Sitshebo was born in 1952 and educated at St Bede’s College, Umtata. Ordained priest in 1980, after holding various positions in Zimbabwe he later became a tutor at the United College of the Ascension, Selly Oak, Birmingham, England before being elected bishop in 2001.

His death means that the Province of Central Africa loses one of its loyal sons who was never part of the Kunonga breakaway faction in Zimbabwe and was considered one of the more moderate voices on the episcopal bench. It is essential for the Province that his replacement arises out of a properly conducted election and produces a credible candidate who is not simply a protégé of one of the factions within the House of Bishops.

Harare, Zimbabawe: Today’s historic signing of a power-sharing concordat between President Robert Mugabe and Morgan Tsvangirai leader of the Movement for Democratic change is remarkable.

All people of good will wish and pray that the spirit of the agreement as well as the letter is followed without machination and misuse of power. It is to be hoped that this will not prove to be a vain hope.

Many with long memories recall the late Joshua Nkomo leader of the then ZAPU party whose tenure as Minister of Home Affairs in Mugabe’s cabinet ended in exile. Nkomo was outmanoeuvred by Mugabe, a historical fact of which Bishop Wilson Sitshebo was well aware.

Provincial House of Bishops: Bishop Sitshebo’s death now means that there are no less than three unfilled Provincial sees including Lake Malawi, Upper Shire, Matabeleland and a further two if the temporary custodianship of Manicaland and Harare are also taken into account.

Bishop Albert Chama of Northern Zambia and currently acting Dean of the Province must ensure that all dioceses are filled before his ambition to be elected Archbishop can come about.

Unfortunately the latest noises from him are distinctly Mugabe-like and he is now insisting that being white is a disqualification for an elected bishop, even if it is by overwhelming majority.
This is proving problematic for him in the Diocese of Lake Malawi where most clergy and laity still consider that their choice as bishop of the (white) Rev’d Nicholas Henderson of London, England is the valid one. Excuses that he was formerly a member of the Modern Churchpeople’s Union, the Anglican Communion’s oldest Theological Society, seem contrived when Bishop Trevor Mwamba of Botswana has recently returned from a major (pre-Lambeth) speaking engagement at the MCU Annual Conference and Bishop James Tengatenga of the Diocese of Southern Malawi remains an international editorial consultant of Modern Believing the MCU quarterly Journal.

Whilst at Selly Oak College, the late Bishop Sitshebo was reported to be an avid reader of the Journal.


ANGLICAN-INFORMATION chooses to take the Zimbabwe deal between Mugabe and Tsvangerai at face value and, despite the difficulties of what looks like two parallel jurisdictions with potential concomitant conflict, applauds the apparent breakthrough.

In the same spirit it is time for the remaining Bishops of the Anglican Central African Province to stop their authoritarian and counterproductive harassment of clergy and people, particularly in Malawi. They must begin sensible discussions with all the parties concerned to acknowledge elections, fill vacant sees and practice Anglican conciliarity – Bishop Wilson Siteshebo would approve, may he rest in peace and rise in glory.