One member, One vote - now! 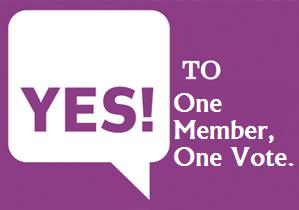 It's time this blog either packed up its briefcase and went home for tea, or took a different tack.

With the Covenant (almost) dead, that focus has gone.

But I came to oppose the Covenant through earlier studies which strongly suggested that attempts to determine doctrinal difference through (semi-) legal processes were both doomed and destructive of the Church.

Related studies had long ago brought me to the view that every member of the Church of England should  have a vote for its representatives in Church government.

When General Synod defeated the proposal for women bishops despite 42 of 44 dioceses voting for it, some people raised their voices in favour of reform of Synod, and not least of the method of electing lay members. I would like to see that voice grow louder and for longer.

The consequences of change
It isn't possible simply to change the voting system as though it was a technical matter with no other implications.
The fundamental change will be to treat each enrolled member as a fully adult member of the Church. I think such change will be beneficial - and equally that it will be resisted.

From first debate in Church Assembly to the instigation of General Synod took some 15 years. I don't doubt that change now will take something like as long. So there's no reason to delay.
Posted by Paul Bagshaw at Tuesday, December 04, 2012