A promising start in Lake Malawi, new elections in North Malawi and an odd couple in Uganda, Bishops Bernard Malango and Chad Gandiya 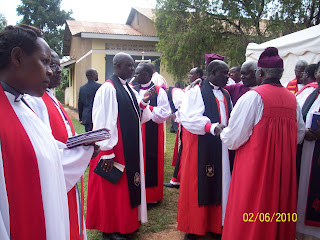 
From ANGLICAN-INFORMATION: A promising start in Lake Malawi, new elections in North Malawi and an odd couple in Uganda, Bishops Bernard Malango and Chad Gandiya

Diocese of Lake Malawi: The new bishop, former Archdeacon Francis Kaulanda, is off to a promising start with declared intention of proceeding carefully and cautiously to re-establish good order and oversight. He is determined not to find himself held hostage by hostile press reports generated by disgruntled factions. In this respect he is wisely keeping a studied distance from Provincial affairs.

Bishop Kaulanda’s financial target has now increased to the sum of twenty-five million Malawi Kwacha, (£111,000 $165,000 €134,000). This is a daunting objective that will require the good will of donors whose activities and support have been prejudiced by the behaviour of Provincial bishops over the past few years. Good news is of a report of a forthcoming donors meeting in London, UK in August to reassess the situation in the diocese.

Diocese of North Malawi: Following the abortive attempt by acting Dean of the Province, Bishop Albert Chama of Northern Zambia to impose the Rev’d Leslie Mtekateka as bishop. Mtekateka’s ‘election’ was nullified due to confirmed reports of gross personal misconduct.

New elections will finally take place this weekend on Saturday 26th June. These elections will be held in the Malawian capital city of Lilongwe in the Diocese of Lake Malawi following Albert Chama’s habitual practice of holding elections outside the vacant diocese in order to reduce any objections or dissent.

Once this election is complete and the new bishop consecrated and enthroned all vacant sees will have been filled in the Province of Central Africa. Elections for the position of Archbishop will then take place and reports of clandestine background jockeying for position amongst the bishops means that acting Dean Chama’s position is not guaranteed as the next Archbishop.

A visit to Uganda: Bishop Chad Gandiya the beleaguered Bishop of Harare, whose ministry has been blighted by the activities of the infamous and renegade ‘Archbishop’ Nolbert Kunonga, was the guest speaker at the annual Ugandan Martyrs Memorial celebrations held on 3rd June at Namugongo village in the Wakiso District of central Uganda.

As is usual vast crowds attended this national event at which Chad Gandiya bewailed the “assertiveness of the gay movement”. This was presumably in an attempt to silence Nolbert Kunonga’s carping criticism that the Central African Province is ‘pro-gay’. The gay issue, previously rarely mentioned in Africa, has been stirred up in recent years by visiting American conservative preachers to Uganda and growing divisions in the Anglican Communion.

According to the Kampala Monitor Bishop Gandiya went on to say: “We are living in a world which is turned upside down. Some people talk about wicked things as if they are good. We need people to stand up for the truth and reject homosexuality…the confusion of right with wrong [has] destroyed the morals of the young population.”

Former Archbishop Bernard Malango fêted by unsuspecting Ugandans: Ironically, Bernard Malango, a former arch-critic of Bishop Gandiya and one time Archbishop of Central Africa, accompanied Gandiya on his trip to Uganda and was fêted as a distinguished guest at a dinner held in his honour.

We can only assume that the Ugandan hosts were unaware of Bernard Malango’s close and continuing friendship with ‘Archbishop’ Nolbert Kunonga. This was exemplified when he protected Kunonga in 2005 from prosecution despite strong evidence of Kunonga’s guilt in dozens of charges including complicity in incitement to murder. Their friendship and regular contact continues to this day.

Posted by ANGLICAN-INFORMATION at Wednesday, June 23, 2010