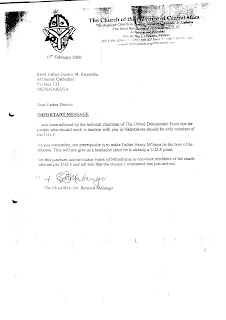 ANGLICAN-INFORMATION reports that a civil court injunction brought by the twice-suspended Rev’d Dennis Kayamba of Nkhota-kota, Malawi has stopped the planned consecration of the Venerable Francis Kaulanda, Archdeacon of Lilongwe as the next Bishop of Lake Malawi.

Previous editions of ANGLICAN-INFORMATION have reported that Francis Kaulanda had recently been elected as Bishop of Lake Malawi. The Provincial bishops had finally forced a new election following the long-standing impasse after the election of the Rev’d Dr. Nicholas Henderson of London, U.K.. Dr Henderson’s election was not confirmed because of an unsubstantiated and discredited charge of ‘unsound faith’. Dennis Kayamba, a member of an organisation called ‘Forward in Faith’, now with links to schismatic breakaway groups in the United States, at that time was one of five objectors to Henderson.

Subsequently, we have reported 150 lay people objecting to the election of Francis Kaulanda – a copy of the affidavit containing the names is available on our website.

A tangled web of intrigue is now unravelling to reveal, from our sources, that during the election of Francis Kaulanda the name of Dr Henderson had been re-presented but, at the insistence of acting Dean of the Province Bishop Albert Chama, was disallowed together with the names of two other local candidates including Joseph Kaswanyando a former chaplain to the late Bishop Peter Nyanja. Kaulanda was then elected narrowly defeating the remaining candidate one Henry M’baya a Malawian working in South Africa whose name had been added at the last moment by the bishops.

In this context a leaked copy of a letter written by former Archbishop Bernard Malango on 15th February 2006 (carried by us as a news story on 14th February 2008) has now reappeared on the influential Malawian blogsite ‘Malawi Digest’. On this site, run by Malawian journalists, readers can find the letter in an article dated 16th September 2009 headed ‘UDF squabbles, 3 dead’. The report speaks of ‘UDF* clandestine activities in the Anglican Church’. See: http://malawidigest.blogspot.com . com/ A copy of the letter is now also available on our website – navigate to ‘Gallery’.

ANGLICAN-INFORMATION readers will no doubt be confused by these political machinations but Malango in his letter addressed to Dennis Kayamba advises that ‘our prerequisite is to make Father Henry M’baya boss of the diocese. This will not give us a headache as he is already a UDF plant. On this juncture advise Father Frank (Dzangtenge) of Mtunthama to convince members of the church who are pro-UDF that the cheque I mentioned has just arrived’.

The ‘Malawi’ Digest site goes on to say that ‘the UDF is favouring Fr Henry M’baya to take over the leadership of the diocese as bishop whilst the majority of the church’s faithful are supporting the installation of British national, Rev Fr Nicholas Henderson’.

ANGLICAN-INFORMATION observes that in the Malawian context these developments are politically explosive. They leave acting Dean Albert Chama, who is often described as a protégé of former Archbishop Malango, in a dangerously exposed position with the implication that both the former election of Dr Henderson and the latest election of Francis Kaulanda have been resisted by him and former Archbishop Malango with bribery for political reasons in favour of the unpopular UDF ‘plant’ Henry M’baya. These are serious and damaging revelations about how episcopal elections in the Central African Province are apparently being manipulated for subversive political purposes.

ANGLICAN-INFORMATION calls upon acting Dean Chama to make a proper statement of clarification explaining how the election of a bishop for Lake Malawi has become associated with political opportunism and implied bribery. The people of the much-troubled Province of Central Africa deserve the truth about what could be a major scandal.

* The United Democratic Front represents the Malawian political opposition and the former President Bakili Muluzi who has been in serious conflict with the current President.


Want to have your say? Write your comments in below or visit our companion blogsite: http://anglican-information.blogspot.com

Posted by ANGLICAN-INFORMATION at Thursday, September 24, 2009