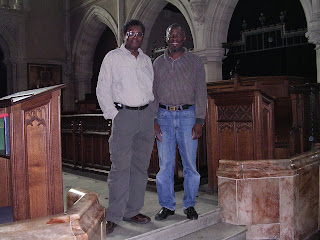 The Ven Francis Kaulanda (on the right of picture) and Bishop James Tengatenga of South Malawi in the Rev'd Dr. Nicholas Henderson's Church of All Saints, Ealing
Saturday 1st August: The election took place today for a new bishop of the Diocese of North Malawi vacant since the resignation of Bishop Christopher Boyle now working as an Assistant Bishop in the Diocese of Leicester, U.K.

The elected candidate was the Rev’d Fr Leslie Mtekateka of St Timothy’s, Chitipa.

Previously, the then only candidate, the Rev’d J. Scott Wilson, SSC, formerly of the Diocese of Fort Worth in the United States had withdrawn his candidacy. His active membership of a breakaway faction from the Episcopal Church known as the Anglican Church of North America (A.C.N.A) had ensured that even if elected he could not become a bishop in the Central African Province because he does not belong to a province in communion with the Archbishop of Canterbury.

The proceedings of the electoral process for the position in Northern Malawi were marred by the unseemly haranguing of North Malawi representatives by acting Dean Albert Chama who embarrassed those present by shouting out at them angrily ‘Why are you choosing white people?’.

In Lake Malawi, where the House of Laity have held out for four years for their elected bishop, the Rev’d Dr. Nicholas Henderson of London, U.K. the successful candidate, at elections also held today, was the Venerable Francis Kaulanda, Archdeacon of Lilongwe. The other candidates were the Rev’d Joseph Kaswanyano and the Rev’d Paul Banda.

Francis Kaulanda has been a study leave student of Dr. Henderson in London and has been Archdeacon of Lilongwe for some years. Kaulanda will now have to work hard to regain the confidence of priests and people of the Diocese of Lake Malawi given the strong feelings of injustice that have resulted from the original flawed Court of Confirmation that unfairly condemned Henderson as being ‘of unsound faith’ following his election.

Want to have your say?
Visit our blogsite:
http://anglican-information.blogspot.com