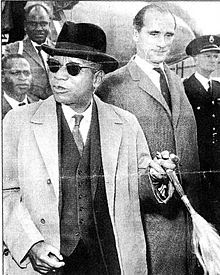 Anglican Communion matters: Bishop James Tengatenga of the Diocese of South Malawi, fresh from his six month sabbatical study leave in the United States, has been attending the Standing Committee of the Anglican Consultative Council of which he is the Chair. This 15 member Committee, meeting in London 24th -28th July, is now in uncharted and controversial waters as it takes on a wider executive role in the Anglican Communion. It has been much engrossed with its own future as well as wrestling with the resignation of three ‘Global South’ Archbishop representatives including Archbishop Henry Orombi of Uganda.

In the meantime the priests and people of the Diocese of South Malawi await the administrations of their bishop whose long absence is causing disquiet.

Malawi, Diocese of Upper Shire: The award of an honour to one of Malawi’s longest serving and most venerable priests has been greeted with pleasure. In a wise and welcome move Bishop Brighton Malasa of Upper Shire Diocese has recognised one of his senior priests with an announcement that the Rev’d John Mandambwe is to be made Canon of the Cathedral.

Fr Mandambwe, a resident of Malindi and who is now in his eighties, has served as a priest under six bishops. A onetime soldier in the Second World War King’s Africa Rifles, his exceptional and long service to the Anglican Church in Malawi and the diocese of Upper Shire has finally been recognised with this well-deserved honour.

Zimbabwe, Diocese of Harare: No change, reports continue to arrive of intimidation of loyal Anglicans by the police on behalf of the Nolbert Kunonga faction and the barring of church premises. Roy Bennett, politician and MDC treasurer who was recently acquitted of trumped up treason charges that led to his arrest, has rightly assessed the current situation. A ‘military junta’, said Bennett, now rules Zimbabwe, with 86 year old President Robert Mugabe little more than a figurehead. ‘I honestly believe that Robert Mugabe … half the things that are going on he has no idea about’ he is quoted as saying in a recent BBC interview.

ANGLICAN-INFORMATION observes the increasing similarities in Zimbabwe with the regime of Malawi’s President Hastings Banda from 1966 – 1993. Banda started well as the Ngwazi ‘chief of chiefs’ President, a hero of the people, but in later life his regime descended into one of tyranny and intimidation. He purportedly died aged 99 or 101 years of age. In terms of potential inheritance Robert Mugabe’s mother lived until she was 92.

It seems that longevity in these cases accompanies dictators whilst life expectancy in Zimbabwe (once one of the most prosperous of African countries) is now 34 for women and 37 for men, the lowest in the world.


Want to have your say?

Posted by ANGLICAN-INFORMATION at Sunday, August 01, 2010