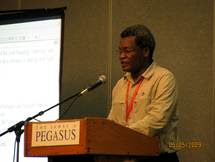 Bishop James Tengatenga at work in the wider Anglican world

Our correspondent reports: ‘The Southern Malawi Board of Finance presented its 2010 budget to Bishop James Tengatenga and he did not like how it was arranged because the bursaries for his children were low. Tengatenga consulted his clergy and the clergy trimmed the budget again! This led Bishop James to grow angry saying that he was targeted by both laity and clergy. He has told them that when he returns from his six month sabbatical leave in the United States he will decide whether to resign or not and the laity and clergy have been asked to think about it on their part’.

Despite earlier objections which delayed his confirmation, Fr Leslie Mtekateka formerly of St Timothy’s, Chitipa will almost certainly be confirmed on Friday 12th February at a Court to be held in Mzuzu. Some of the bishops who should be present will be represented by diocesan priests. Mtekateka replaces former Bishop Christopher Boyle who resigned last year to take up a position as an assistant Bishop in the Diocese of Leicester, U.K.

The trial resumes earlier than expected on Wednesday 10th February in Nkhota-kota, Diocese of Lake Malawi. Leonard Mondoma cook to the late Canon Rodney Hunter an English priest who died in November 2006 was accused by twice-suspended priest the Rev’d Dennis Kayamba of poisoning his employer. Thus far no evidence has emerged to suggest that Hunter died of anything other than terminal cancer for which he had been treated in the U.K..

Shortly after the accusations some parts of the British press conducted a witch-hunt against Mondoma with condemnatory headlines based on no evidence. Mondoma’s case is supremely ironic considering that he was always Hunter’s most loyal employee and vocal supporter.

During the first part of the trial held in January, Dennis Kayamba the chief accuser was unable to explain how he could have known that Mondoma was a poisoner before any evidence was produced. Kayamba was also unable to explain why he was in possession of the late Canon Hunter’s will and house keys.

For what was almost certainly a false accusation Mondoma was held in life-threatening conditions in prison in Nkota-kota for 18 months, one year of which he was uncharged.

Medical evidence will be given at the resumed case starting this week.

Following an unprecedented number of objections to his election the Venerable Francis Kaulanda, Archdeacon of Lilongwe, remains unconsecrated. According to the Malawi Nation Newspaper 25th September 2009 the Bishops have confirmed the election but this remains disputed. The matter remains subject to a Court injunction brought by the protestors.

or
try our companion blogsite:
http://anglican-information.blogspot.com

Posted by ANGLICAN-INFORMATION at Monday, February 08, 2010