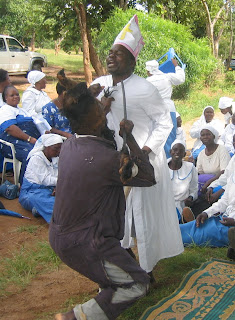 Well bishop - if you won't listen to me!
Anglican-Information reports that: following the unprecedently large number of
objectors (carried by us in our last issue and available on our website) against
theVenerable Francis Kaulanda, Archdeacon of Lilongwe as the next Bishop of the
Diocese of Lake Malawi, we have now received some objections to the objectors!
In a letter to the acting Dean Albert Chama of the Central African Province sent from All Saints Parish, Nkhota-kota, McDonald Kapatuka (Churchwarden) Joyce Umanda (Parish Treasurer) and Richard Azadi (Parish Secretary) have written to point out that some of the objectors, including at least three of those named are not in fact opposed to Kaulanda’s appointment. We have also received a letter from Stephen Mmela, churchwarden of Bua Parish distancing himself from the objectors. We have posted these communications on our website - navigate to ‘The inside view- letters, articles and correspondence’.

In addition we have received further objections to the election of the Rev’d Fr Leslie Mtekateka, Rector of St Timothy’s, Chitipa, as Bishop of Northern Malawi.

ANGLICAN-INFORMATION comments: despite the serious objections and counter objections lodged against them it is certain that the Central African bishops will confirm both episcopal candidates for Northern and Lake Malawi later this month. As one priest commentated ‘even if they receive a 1000 objections they will go ahead regardless with their own preferred men. What we need is a serious revision of the Constitute and Canons to take away some of the bishops’ excessive powers – they have too much for the good of the Province’.*

The consecrations of Kaulanda and Mtekateka will take place on Sunday 4th October in Upper Shire Diocese (by design well away from any possible objectors in the dioceses to which they have been appointed) at the annual UMCA (Universities Mission to Central Africa) celebrations. **

This executive action epitomises a problem that is characteristic of the Central African Province and its bishops. The apparent adoption of near monarchical status means that the Central African bishops are frequently perceived to have allowed themselves to become an elite, privileged and unaccountable caste apart. The antics of the likes of Bishops Nolbert Kunonga and Elson Jakezi in Zimbabwe reinforce such views. In Malawi three of the four bishoprics are now readily seen as being or about to be occupied by what are effectively imposed bishops largely against the will of the people.

ANGLICAN-INFORMATION was set up to be a ‘voice for the voiceless’ and we believe that we have accurately portrayed the people’s growing disillusion with current episcopal oversight. The ease of modern communications and a strengthening laity mean that unless there are changes soon, even more difficulty lies ahead for what is already a troubled Province.

This could be rectified by an imaginative choice by the bishops for the next Archbishop of the Province who will function in the proper Anglican mode of ‘Bishop in Synod’ rather than by means of an ex cathedra magisterium.

In a subsequent issue we will look at the potential candidates in some detail. In the meantime we will continue to report the people’s news and what is often otherwise missed from this corner of the Anglican Communion.

* It is easy to see why the current Provincial Constitution and Canons are lacking and out of date – the last edition was published in 1996 but dates from the original 1955 preamble and includes various piecemeal additions formulated in 1969,1972 and 1983. Overall it is tilted strongly in favour of the bishops.

** The Universities Mission to Central Africa (1857-1965) was inspired by lectures given by the explorer David Livingstone. The society had two main objectives:
a. To establish a mission presence in Central Africa.
b. To oppose the slave trade.

The UMCA was particularly active in Zanzibar and Nyasland (later Malawi).

UMCA was the first Mission Society to devolve sole authority to bishops in the field – herein lie many of today’s episcopal problems as the bishops were ceded enormous executive power which has been inherited and used and misused ever since.

Posted by ANGLICAN-INFORMATION at Tuesday, September 15, 2009